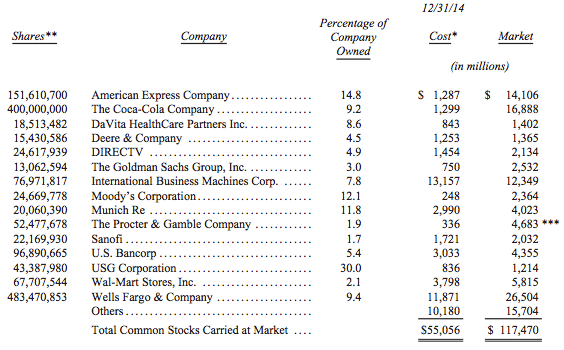 In 2014 Berkshire Hathaway Inc. celebrated fifty years in the market. On that occasion Warren Buffet made some observations regarding his company’s performance through the years. There have great gains and great losses but no one can discount his long innings in the stock market. His career has usually been looked at with awe. For a man who lives and spends modestly the only extravagance seems to be his company’s performance. It has withstood many business cycles and world changing events with an almost steady keel. It makes perfect sense then to observe the Warren Buffet investment portfolio. This is the man who counts Benjamin Graham (the pioneer of value investing and author of The Intelligent Investor) as his teacher.

Early on Buffet made some strange and not very wise decisions like investing in the mills of New England…Berkshire being one of them. He acquired them when most of the mills were closing down. Soon enough they did start shutting down. Buffet’s logic was that these companies had one last – kick to offer, not unlike the last nicotine puff of a cigar. He quickly realized this strategy might earn him short- term gains but not long-term ones. It was here his long-term partner Charlie Munger stepped in to undertake course correction. His advice which helped Buffet build his profitable business was “Forget what you know about buying fair businesses at wonderful prices; instead buy wonderful businesses at fair prices.”

Berkshire has made wise investments in car, home, computer, credit card, insurance, retail, banking industries –all of whom are required at all times by the public.

This sector has helped Berkshire grow continuously from the 60’s with their investments in National Indemnity and National Fire & Marine.

Berkshire has invested in BNSF, a utilities company and Berkshire Hathaway Energy Company. These companies are both characterized by earnings that will cover their interest payments even in the worst of economic conditions.

Warren Buffet Investment Portfolio (Berkshire Hathaway) has shares in the largest home builder in America, Clayton Homes. Given below is a snapshot of companies that Berkshire has in Finance and financial products.

A snapshot of the 15 common stock investments (from Warren Buffet Investment Portfolio) with the highest yield at Berkshire Hathaway is given below.

What Warren Buffet Says About His Portfolio

Buffet looks on his investing history of 5o years and has this to share.

“The unconventional, but inescapable conclusion to be drawn in the past fifty years is that it has been safer to invest in a diversified collection of American Businesses than to invest in securities – Treasuries for example – whose values have been tied to American currency. This was also true in the preceding half-century, the period including The Great depression and two world wars. Investors should heed this history. To one degree or another it is almost certain to be repeated during the next century.”

“Stock prices will always be far more volatile than cash-equivalent holdings. Over the long term, however, currency –denominated instruments are riskier investments-far riskier investments-than widely-diversified stock portfolios that are bought over time and that are owned in a manner invoking only token fees and commissions. That lesson has not customarily been taught in business schools, where volatility is almost universally used as a proxy for risk. Though this pedagogic assumption makes for easy teaching, it is dead wrong: Volatility is far from synonymous with risk. Popular formulas that equate the two terms lead students, investors and CEO’S astray.”

Buffet and his team have followed a consistent strategy of maintaining a diversified portfolio in sound businesses with good financials. Of course there have been some misses but by and large he has done good by his investors.

Buffet has often been chastised by his Vice-Chairman Charlie Munger for the times he has indulged in thumb-sucking – a metaphor for sitting without taking decisions investment-wise. Despite this, Buffet has managed to pull out some aces, work steadily and strongly to generate wealth for his investors every year.