Fundamental Analysis Of Stocks With Marketxls

The list of MarketXLS functions that you can use inside our add-in for Microsoft Excel is continuously expanding. This page is your go-to resource for the general overview of fundamental historical functions at your disposal. As new capabilities are added, they will be listed here.

The historical fundamentals category of functions can be accessed through Excel’s inbuilt function menu as shown below and can be used for in-depth fundamental analysis of stocks. 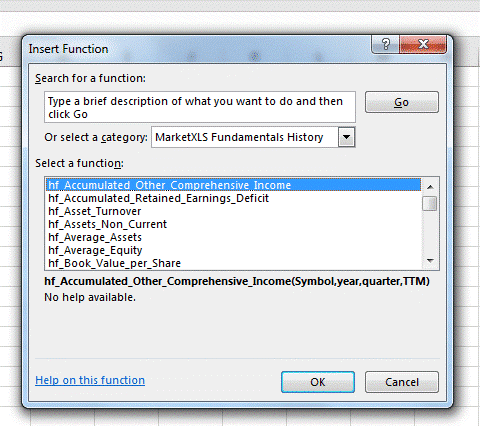 You can just start typing =hf_ and Excel will also give a list of all functions available like shown below: 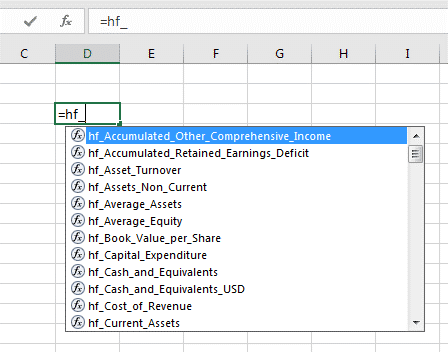 All these functions have a consistent format of usage which is explained with examples below:

The following are the arguments for these functions…

Important Note: All Quarterly values refer to Calendar Quarters and not the fiscal quarters. So, when you ask to get data for Q1 it means data for January to March End. Now this period could be Quarter 3 in some companies whose Fiscal year is from April to March.

We are especially happy to present to you a new way to define periods, which is a feature that our long-time users will especially appreciate. If using the classical way of defining periods (as explained above), when you wanted to get values from a company’s latest financial statements, you first had to find out which fiscal year (or quarter) is the latest for which a company issued an SEC filing. After that, you often had to find out a company’s terminology in naming fiscal years, which do not end on December 31st. For example, if a company’s fiscal year ends on January 31st, the year which ended on January 31st, 2019, might be considered financial year 2018 or 2019, depending on the company.

To solve this problem, we have introduced the option to define periods with relative references. If you are interested in the last reported year, you will define the period as “ly.” For example:

Additionally, you may want to specify cells in which the last date of the specified period will be displayed.

The table above shows a very simple overview of how it works. A spreadsheet set up with relative time references will automatically update with new values when the analyzed company publishes new financial reports. The last 12 months periods (“lt”) are especially useful, as they enable you to track trends in the company’s performance on an annual basis, without waiting for the fiscal year to end.

Take your investments research to next level and power your fundamental analysis of stocks with easy to use MarketXLS functions today.

Learn How to Use a Technical Stock Screener

“The Ultimate Guide to ETF Screeners”