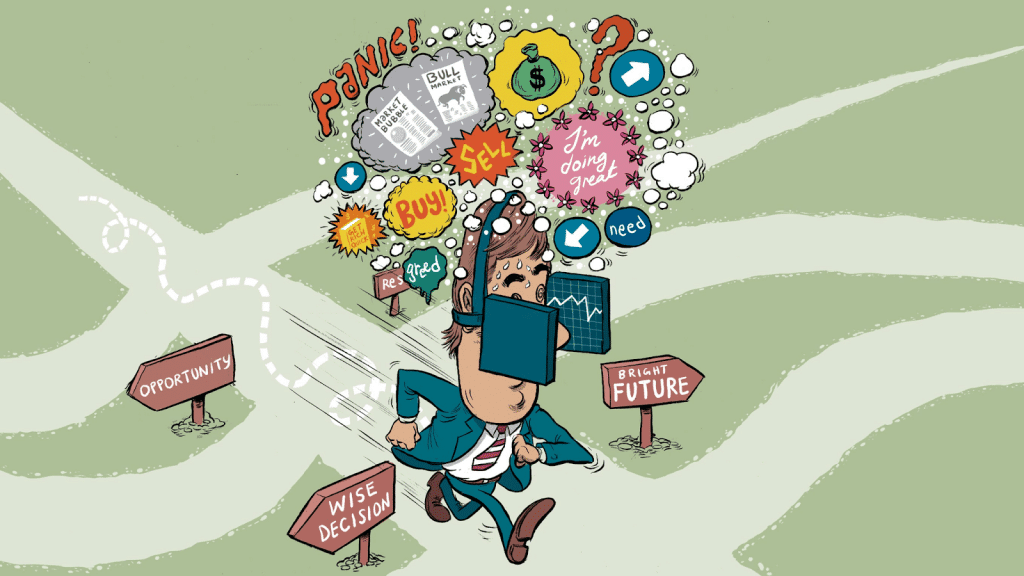 A bias is an assumption or belief that distorts the ability to make a decision based on facts and evidence. It can be innate or learned. These prejudices may develop biases for or against a belief.

An investment process, which includes many steps like research, data collection and analysis, evaluation of various investments, selecting the right one and following the same steps in any case, is full of psychological pitfalls. However, to make an optimal investment it is important to reach an impartial decision and this will be achieved if one identifies, understands and hopefully overcomes these biases.

Heuristics refers to the mental shortcuts we all use throughout the day, to make dozens of small decisions. Using a heuristic technique usually results in a “good enough” decision, but possibly not the best one. A common heuristic shortcut involves assuming that things which happened before are likely to happen again and, conversely, that things which have never happened before are unlikely to happen in the near future. In investing, this can manifest as:

Examples are easy to recall or there has been a recent highly publicized event.

They are not personally aware of any recent occurrence.

Now that we have understood the influence of heuristics and biases let’s look at each one of them in detail.

The first heuristic-driven bias that we talk about in detail is typically known as Availability. The Availability heuristic is when decision makers assess the probability of an event by the ease with which instances can be brought to mind. Example: A small number of highly public corporate bankruptcies drive investors away from all risky equities, when the vast majority of corporations are in strong financial condition.

There is also a great impact of imagination and vividness on decision making. If outcomes are easy to imagine, then the act of imagining them will tend to make them appear more probable. This can be observed after a natural disaster, when property insurance sales often skyrocket.

A decision frame is the decision maker’s view of the outcomes and the risks associated with a particular choice. The way a decision is framed can cause respondents to switch their selection between options. Decision frames are largely controlled by the formulation of the statement. Often, small changes in vocabulary, without altering any options available, can cause a decision maker to change her decision among choices, and in predictable ways.

One example of framing can be seen in the following example:

We can clearly see that option 2 does a better job at framing the earnings report. The way it is presented – as an improvement over the previous quarter – puts a more positive spin on the Revenue number.

Endowment effect is when we own an item, we tend to view it as more valuable and have a preference for holding on to what belongs to us. We infer that the item has a greater value when it is ours. It may also happen that individuals may view the value of the object irrationally greater than the market value when they own it.

One classic example of this may be when many homeowners refuse to set a selling price on their home that is lower than where they bought it regardless of any recent movements in house prices in their area.

When we hold assets that are currently priced below where we purchased them, we don’t want to realize the loss. For as long as they are just a loss on paper, it’s somehow not official.

The Disposition Effect is the tendency for individuals to be risk averse over gains, but risk seeking over losses. Many investors will not sell anything at a loss. They don’t want to give up the hope of making money on a particular investment, or perhaps they want to get even before they get out.

Regret Theory postulates that we make some decisions in response to the extent of our anticipated regret if the decision subsequently goes against us.

Anticipated regret may be intensified by Omission Bias. For instance:

Representativeness is the human desire to see patterns, even where none exist – can generate a belief that we can predict the future, based on fallacies about what has happened in the past. It is the mistake of believing that two similar things or events are more closely correlated than they actually are.

Conservatism bias is when investors cling to their prior opinions or views at the expense of acknowledging new information. It causes them to overweight base rates and to underreact to sample evidence.

Non-Regressive Prediction is one such representativeness where in the context of financial markets we believe that a particular market will not see a correction, because of the perception that a correction has never happened before.

Gambler’s Fallacy manifests in the financial markets with participants believing that equity market returns should “regress to the mean ” (return to a perceived long-run average) after a series of strongly positive years.

Many times when investors feel that they are taking the right decision or behaving rationally it may happen that the decisions are affected by the  underlying bias of the investor. Which of these biases do you see in yourself as an investor?

What are Common Investor Biases and Ways to Avoid Them …. https://www.axisbank.com/progress-with-us/money-matters/save-invest/what-are-investor-biases-and-how-to-avoid-them