Working capital is not mandatory to be put inside the financial statements. It is the measure of the liquidity of the firm and it gives us ideas about how well a company can meet its current obligations.

The current liabilities are some kind of gauge that we have to understand the firms near future obligations and if with the current assets the company will be able to meet those obligations. Essentially, working capital gives us an indication of how liquid is a firm.

Let’s use MarketXLS to calculate working capital of Apple Inc. from 2011 to 2016. And to do that we will have that year number in one column and we will simply refer to that column when calculating the current assets and the current liabilities. 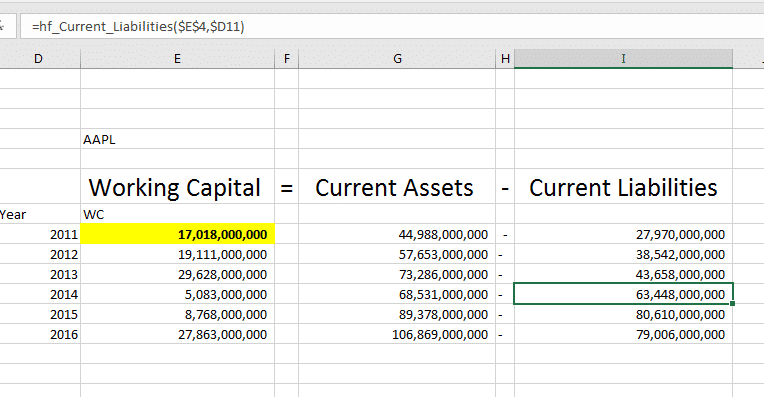 Instead of using the current assets and the current liabilities functions you can also use the working capital function instead.

Now that we have the numbers let’s try and see what do they mean.

How to interpret working Capital
If the working capital is increasing we can conclude that the company is getting more and more liquid. Which could mean a lot of things, mainly, it could mean that the company is able to utilize its existing resources in a better way to generate more revenue and accumulate more cash flow from operations.

You might be wondering why some companies have negative working capital and some positive. A simple explanation for this is that the companies who buy inventory before they sell products have negative working capital. So, Walmart, needs to buy inventory before they sell the products in stores. What it means is that Walmart would have more current liabilities and less current assets because they would pay their vendors much earlier than when they can charge their customers.

So, in general, you would see that software companies would have positive working capital because they don’t have to buy the inventory before they could sell the product to the end customer. Which means that they immediately get revenue without accumulating current liabilities.

In the case of Walmart, working capital is less than 1% of their revenue. So our interpretation above may not hold true for Walmart.

With MarketXLS you can do all these calculations and ratios very easily with the historical fundamental functions as described. If you have done any analysis on working capital and would like to share your knowledge please contact us.