Beta Formula In Excel (With Marketxls) 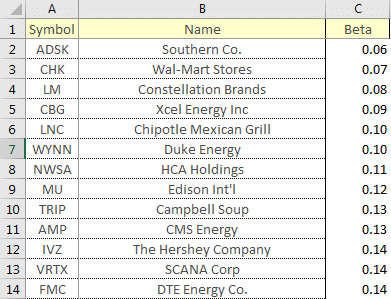 This article explains how to use MarketXLS Beta formula in Excel to get stock beta values fast in Excel. What does beta mean, how to interpret it and the concept of negative beta?

What beta really tells us is the volatility of a stock. It tells us how large or small is the moment of the stock relative to a neutral level (generally the stock index). Beta does not provide any indication of the trend or the direction of the movement. In simple terms, it means that if you are looking for a stable company whose share price does not move a lot then you want the beta to be as small as possible. And if you’re looking for a company or a stock that moves quite a lot then you are looking for beta which is as high as possible.

So the companies with large beta have the potential to go on upside quicker and vice versa. These stocks may make you make more money but also lose more money a lot quicker than the stocks that have lower beta.

Typically day traders will look for companies with the higher beta so they can gain as much as possible in short period of time.Basically, the market itself has a beta of 1. Stocks that have a higher volatility will have a higher beta. Let’s say that the beta of one stock is 1.2, that means typically this stock is 20% more volatile than the stock market. That’s why generally when the stock market is not doing very good people generally sell off stocks with higher beta and it invests in the stocks with lower beta. 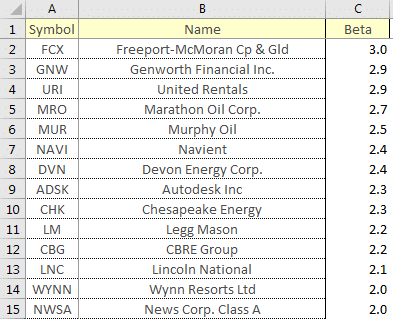 How to calculate beta in Excel – Beta formula in Excel

To calculate Beta, calculate the slope of series of returns of the stock and of the index. Excel provides a formula =Slope(Series1, Series2) to do that. However, MarketXLS exposes the function called =Beta(“Symbol”) to just return the current value of the beta against the respective index. 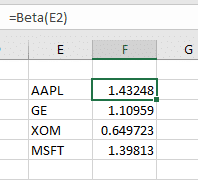 Interpret the Beta of a Stock

It is also possible that you have stocks that have a negative beta. The stocks with negative beta would typically move in the opposite direction of the market. These stocks serve as hedges when the market is going in the direction you expect it to.

Below are some of the stocks from S&P stocks list that have the negative beta as on today.

Negative beta is very rare and in most cases, you will see stocks that have a positive beta.